Went downtown Saturday night for the Cincinnati Cyclones opening home game against the Wheeling Nailers. After all the shifts in personnel (kinda normal in the ECHL) I wasn’t sure what to expect, but I wasn’t disappointed. Barret Ehgoetz is back this year as team captain. Justin Johnson traded back to Alaska (at his request), but Hans Benson seems more than capable of thumping on people who need thumped on. Benson is a good skater and stick handler too. New goalie Jeremy Smith is just unbelievable. The first Cyclones goal by Matt Pierce (unassisted) was amazing. He just came out of nowhere and dumped it in the net. Chris Mueller scored 2 goals including the empty netter that ended the game. Mark Voakes is already having a great year. This team is fast, balanced and full of talent. I think they’re gonna have a great year.

Here are a few pics. Click to make big:

The kids always come down front during warm-up time hoping to get pucks. The Cyclones don’t disappoint them. 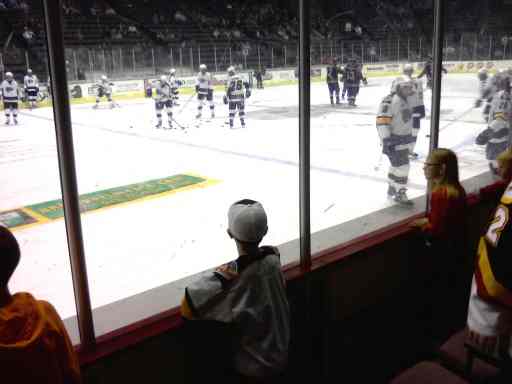 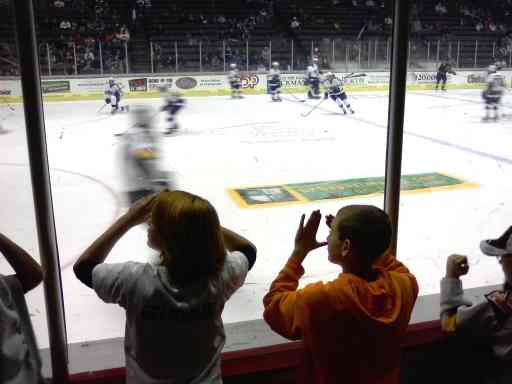 Guido on the Zamboni. Go check out his Cyclones Insider blog. 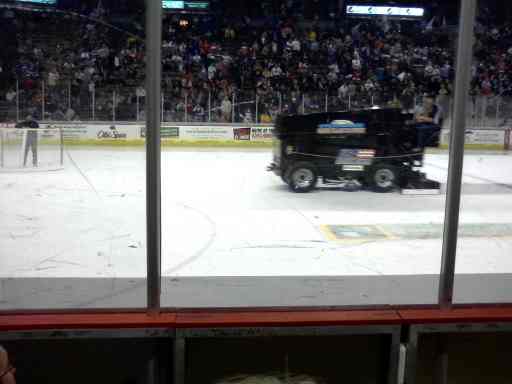 Benson beats the crap out of somebody. Referees where trying to stop it before it go out of hand, which is unusual. 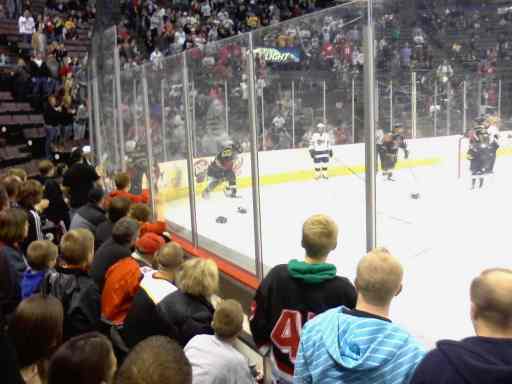 Went for a hike this weekend to Buzzardroost Rock in Adams county, Ohio. It is part of the Edge of Appalachia preserve in southern Ohio. I’ve been to this part of the state before to hike Fort Hill and Shawnee State Forest. It’s a long, long way from the city, and as beautiful as any place I’ve seen.

On the way we stopped in Georgetown (on route 125) and saw the boyhood home of Ulysses S Grant, the schoolhouse he attended and his father’s tannnery. We didn’t take the tour, we just did it the man way – had a look, said mmmm-hm, and got back in the truck. The trailhead is another one of those tiny gravel parking lots you wouldn’t notice if you weren’t looking for it.

The trail is 3.5 miles total (out and back). It goes gradually up along the side of a ridge for most of a mile, dips down then gets steep up another ridge. There are several switchbacks up the slope and some hard uphill stretches until you finally reach the peak. After that it dips down and opens up into Buzzardroost rock, a limestone outcropping that gives a breathtaking view of Brush Creek and the surrounding valley. We picked a beautiful time to go as the fall leaves were nearly at their peak. The rock is 300 feet above the valley floor, and it’s strange looking down into the tops of maple and oak trees. We did actually see some buzzards soaring over the valley.

Although the trail was diverted in places by downed trees and it gets steep, I thought it was a pretty easy trip to get such a veiw. There are a couple other short trails in the area, so if you’re hardcore you could make a day of it. I found more information on the area at this site. Here’s a picture from the top of Buzzardroost Rock. 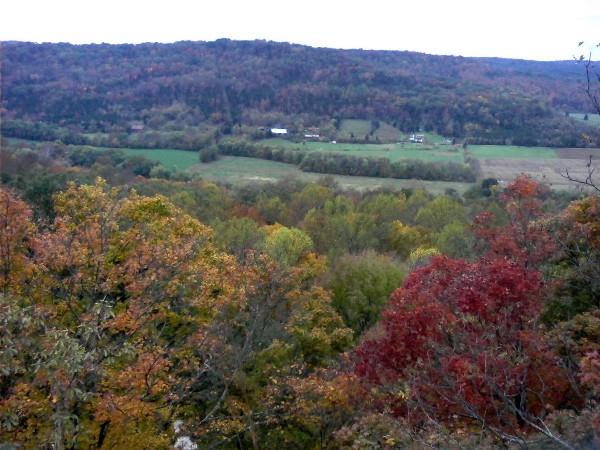 Slowly I’m finishing up the Ohio LinuxFest audio I have. Even though they’ll eventually be released by Ohio LinuxFest in better quality, I still recorded parts of a couple talks to see how my recorder would do.

First is Dann Washko’s talk on the Linux boot process. A guy sat down next to me halfway through the talk, and started making lots of noise, so I cut the recording short. Here it is in MP3 if you want it. It’s starts in the middle of Klaatu’s intoduction.

Second I have Jorge Castro’s talk “Building a Community Around Your Project.” This one actually came out pretty well. It stands up without the slides, and has good advice on not only building a community but on running a free software project in general. Here it is in MP3 and OGG format.

The Reggae Run in Cincinnati is like a big party with a 5K in the middle of it. It’s a race through a hilly neighborhood with free food, drinks and a reggae band at the end. People show up in reggae hats with fake dreadlocks and various other crazy gear. Last year 8000 people came, and this year they kept saying it was by far the biggest year ever.

Even showing up an hour early we had to park on side streets and walk 20 minutes to the park. There was no chance of getting to the car and back before the race, so we ditched our race shirts and spare clothes under a bush. and went to the starting line.

The first leg is a rolling downhill slope of about a mile. My running partner helped me keep my pace down so I wouldn’t wear myself out. It’s easy to get pulled along by the people who kept passing (by the hundreds) but I knew I had to save my strength. Some were yelling and singing and some were even drinking as they ran. The neighborhood turns out to watch and cheer. Some houses had the windows open with reggae blasting out. At the bottom of the hill is a sharp right up Delta Ave which is a half mile straight uphill.

At this point most of the pack I was running with stopped and started walking. We ran part of this Thursday, so I knew what I was up against and kept trudging up the hill. Since it’s straight you can see the top of the hill. Once there, it’s a right turn onto what looks like a flat stretch. It’s not until you make the turn that you see another short, steep hill. I’ll not repeat the language that came out of people who thought the uphill was over. 🙂

I knew what to expect so I just kept trudging up the hill. At the top there’s a little bit of flat ground that leads to a couple rolling hills before the long uphill grade back to the park and the finish line. This was the fun part, as the hills were steep enough that I leaned forward, lengthened my stride and just blasted down, passing people like crazy. Gravity just carried me along. On the upslope I leaned back and shortened my stride again letting some of the people pass I’d just flown by. Next hill I blasted down again then I started the long slow trudge to the finish line. I’d saved just enough strength to make it, but the last mile keeps curving so you can never see the end. I was so glad to see the finish line and be done with it.

The party was just nuts. By the time we grabbed our clothes from under the bush and changed shirts, the crowd was packed elbow to elbow around the food tents, and boy was I hungry. Lines where slow because by the time we got there they couldn’t keep up with the demand. The line to the beer truck was just this huge mass of people that didn’t seem to be moving so we gave up. We went up and watched the band and it was nice to just stand in one place for a while. With reggae though, I’m not likely to stand still. The race is in memory of a girl named Maria who was murdered running in that area, and the band told her story. After a few more songs we started the long walk back to the car.

It was a fabulous time and I can see it becoming a yearly tradition for me. Anyone who can at least walk 3 miles ought to try it. I met my goal of finishing without walking, I challenged myself a little and I had fun.

I finished editing another bit of OLF audio. Some folks went outside for a smoke break and a talk on religion broke out. I thought it was interesting enough to record.

Participants are, from left to right, Linc from TLLTS, me, Joel from TLLTS and Dave Yates. If you’re very religious or very anti-religious this might bother you. Otherwise, I hope you enjoy it. The MP3 is here.